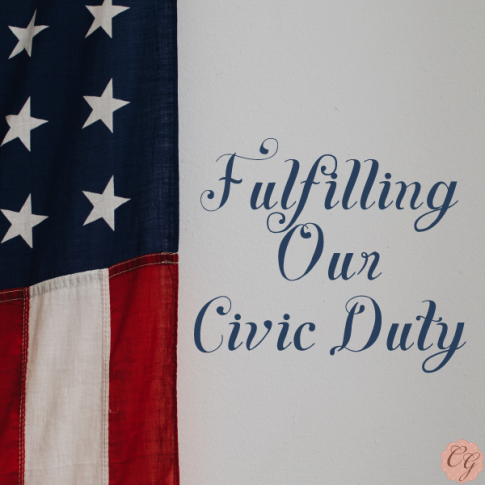 “The United States shall guarantee to every State in this Union a Republican Form of Government…”
~ U.S. Constitution – Article 4 Section 4

Mid-terms are upon us and it’s time to turn our attention to the voting booth. As citizens of this constitutional republic, wherein we are blessed to participate in this experiment of self-governance, we have a civic duty to be proactive in electing representatives and voting on legislation.

As parents, not just “homeschoolers”, it’s our duty to teach our children about fulfilling their civic duties. While our children’s textbooks taught them government and civics, we thought it was time to start putting what they learned into practice. So this year I decided to include the whole family in the voting process; a practice we intend to continue, hopefully, for the rest of our lives.

Begin the Voting Process With Prayer

During the Constitutional Convention, Ben Franklin declared: “In the beginning of the Contest with G. Britain, when we were sensible of danger we had daily prayer in this room for the divine protection.- Our prayers, Sir, were heard, & they were graciously answered. All of us who were engaged in the struggle must have observed frequent instances of a superintending providence in our favor. To that kind providence we owe this happy opportunity of consulting in peace on the means of establishing our future national felicity. And have we now forgotten that powerful friend? or do we imagine that we no longer need his assistance? I have lived, Sir, a long time, and the longer I live, the more convincing proofs I see of this truth – that God Governs in the affairs of men. And if a sparrow cannot fall to the ground without his notice, is it probable that an empire can rise without his aid? We have been assured, Sir, in the sacred writings, that ‘except the Lord build the House they labour in vain that build it.’ I firmly believe this; and I also believe that without his concurring aid we shall succeed in this political building no better, than the Builders of Babel: We shall be divided by our little partial local interests; our projects will be confounded, and we ourselves shall become a reproach and by word down to future ages.”

If one of the Founding Fathers, a self-confessed deist, believed in divine intervention and called for an appeal to God based on divine scripture, certainly we who call ourselves by Christ’s name can and should do no less.

In truth, morality is one of the few things you can legislate, and it’s important for our children to understand this. Upholding and enforcing moral principles is the main point of legislation (the other legitimate duties of government being that of adjudication and defense). Laws are passed to codify and announce to everyone that there will be a penalty for engaging in activity that violates moral principles. Thus, while there is nothing inherently wrong with driving past a pole with a red light affixed to it, it’s certainly wrong to endanger the lives of people walking or driving in the other direction, so we have rules to uphold the moral principle of not intentionally endangering others, and this principle is upheld via things like traffic-lights. We need to teach our kids that, upon examination, most laws have some underlying moral principle. The few that do not obviously require weighing other considerations.

The REAL “Voter Guide”
“The heart is deceitful above all things, and desperately wicked: who can know it?” – Jeremiah 17:9

Too many people vote based on emotion (which they confuse with morality) and not via any sort of intelligent thought. This leads to much of the chaos we see today. However, we must have something to inform our deliberation, i.e., when deciding how we will vote for a candidate or laws, we need some objective standard of ethics to guide us. Given that a theistic worldview is the only one in which such an objective standard can be found, we turn to God’s word for guidance. Thus, we look at the policies of a candidate or political party or proposed legislation and see how closely all options align with Biblical principles.

We began by taking all of the voting materials sent to us, both the official ballots and general election guide as well as all of the junk-mail, i.e. political flyers. I passed out all of the material to everyone, and we all had a chance to read out loud the things sent to us. Needless to say the junk-mail sent out by candidates or proponents/opponents of certain legislation seriously lacked informational substance or else contained outright misinformation. The kids quickly saw how useless most of this kind of material is.

After ignoring most of the junk-mail, we turned our attention to the official election material. Depending who controls the state, the names of proposed legislation and the analysis can sometimes be misleading as well. If you really, really, want to be certain what’s in a proposed bill, it’s best to read the actual text of the bill. I’ve only done this a few times with controversial laws because it can be a daunting task reading the vomit of verbose legalese used to conceal the dubious activity contained in most legislation. Certainly the kids won’t sit still to listen to me read through all of that mumbo-jumbo. So if you decide to read through a bill, do it on your own and give a brief recap to the kids so they don’t lose interest.

“Also of your own selves shall men arise, speaking perverse things,
to draw away disciples after them.”
~ Acts 20:30

While this verse is teaching about doctrine, it can also be applied to “Christian” churches or organizations that put out voter guides. We teach our kids not to place blind trust in such material simply because it alleges to be from a trusted source. If false teachers lie about God’s word, you can bet they’ll lie about political issues. We teach the kids to be diligent and do their homework to the best of their abilities.

Candidates for Our Republic

Again, most political mailers were not at all helpful when deciding on candidates. Usually, their political party platform is sufficient to determine their position on issues, so comparing their positions to Biblical standards is an easy enough task. One thing we impress upon our children is the Biblical principle that all of mankind are sinners and flawed individuals, so we’re not looking to elect a perfect person. Moreover, politicians will be long gone while their policies remain to wreak havoc on us and our families, so it’s best to impress upon the kids that one ought to vote based on a candidate’s policies, not the man’s flawed character. It’s those policies that will affect us for generations, not the person.

While we’re on this subject, it’s also important to impress upon our children the fallen state of the world. We can’t create heaven on earth. Any and all of our efforts will always be flawed in some way. Our choices in life, including our political choices, will be wrought with compromise of one sort or another. Often, in order to enact one law or another, it may adversely affect something else. Furthermore, electing a person who upholds one set of Biblical values may mean you have to suffer their endorsing of some unBiblical value. Few if any candidates will share every single position we hold, and even if they do so through their rhetoric, few actually do so through their practices. The point is, it will always be easy for critics to level some charge at any policy or politician, because few decisions in this life prove to be flawless or without some consequence. The guiding principle is to remain as close to God’s Word as possible and, where there are apparent conflicts of duty, seek to do the greater good.

“And if a house be divided against itself, that house cannot stand.”
Mark 3:25

While we, the parents, will ultimately cast the vote, we let the children know that their participation mattered in how we decided to vote. It was also important to let our kids know that, since we are looking to God’s word to guide us, we should be united and of one mind, so one family member ought not to be voting contrary to another where clear moral principles are concerned. We are not voting based on personal opinions or preferences, but according to God’s will, which seeks unity.

We didn’t want to turn this into a drudgery. All of the kids were allowed to speak their mind and give their opinion. We asked them to defend their positions and explain how it corresponds to Biblical principles. We highly encourage healthy and civil debate, if people differ, until a resolution can be found, again, based on God’s word.

It is our duty to not only fulfill our civic responsibility, but to pass the importance of that blessing down to our children. Through prayer, open discussion, careful research, and the study of God’s Word we’re looking to encourage our children both in their learning adventure and in becoming responsible members of the world in which they live. And, prayerfully, have a little fun along the way.

We’re curious… At what age did you begin to take an active role in civics?

7 thoughts on “Fulfilling Our Civic Duty”

This site uses Akismet to reduce spam. Learn how your comment data is processed.