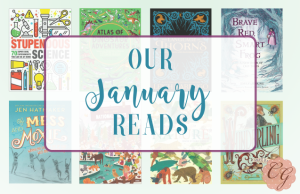 The new year is underway and it’s been a while since we’ve shared what’s recently hit our reading shelf. It has been a wonderful few months of reading, learning, and increasing in wisdom. Our list has a few reads which were recommended for personal development, and others which added to our learning fun. All were an adventure!

We’ve broken down the list into categories and included our personal rating from zero to five stars. To read more about a particular book, simply click the title!

Learning Books for the Family

How are we rating these reads? Good question! If the book has a five, whether learning or for fun, it’s clean and we want it on our bookshelf permanently. Four stars are sorely tempting us, but as our local library carries them we’re in luck. Three stars are worth a look, but we don’t see ourselves reading them too often. Two stars were entertaining, but once was enough. One star was interesting. And zero. Well, it’s zero.

What to be on the lookout for… Generally I enjoy Neil Gaiman books, but this one is especially dark and odd. The Magic of Misfits was a well-told story. I enjoyed it. Please note there is a character with two dads; it is not essential to the story but there none the less. The Atlas of Dinosaur Adventures was beautiful, but one should expect, “…millions of years ago…”. People of the Book was incredible! However, it did have a little language and, while no great detail is given, an affair is touched upon. Of Mess and Moxie is a riot, but not one for your teenage daughters. And, finally, The Purloining of Prince Oleomargarine. It said Mark Twain. It also said previously unpublished. Maybe unpublished for a reason?

You may have noticed a few changes to our review format. It’s a work in progress, but one we hope will work better for you readers and us! Join us again next month as we explore a world of literature and the adventure of reading!

Your Turn!: What’s sitting on your bookshelf, waiting to be read this coming month?