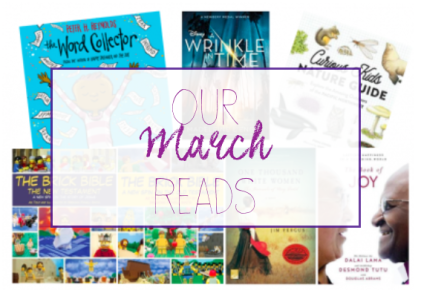 It has been a fun month of reading, learning, and increasing in wisdom. March’s list had a few book club reads, picture books, and others which added to our learning fun. As usual, all of our reads were an adventure!

We’ve broken down the list into categories and included our personal rating from zero to five stars. To read more about a particular book, simply click the title!

How are we rating these reads? Good question! If the book has a five, whether learning or for fun, it’s clean and we want it on our bookshelf permanently. Four stars are sorely tempting us, but as our local library carries them we’re in luck. Three stars are worth a look, but we don’t see ourselves reading them too often. Two stars were entertaining, but once was enough. One star was acceptable. And zero. Well, it’s zero.

What to be on the lookout for… The Brick Bibles were fun; it was great seeing the creativity which went into each panel. A Wrinkle in Time was a book club read and always a treat. It’s one of my favorite childhood series. The Book of Joy was another book club read of mine, and rather a disappointment. It was an interesting concept and I enjoyed hearing the exchange between the two gentlemen; however, I found the book itself to be lacking. Several references to scientific studies failed to have citation and no strong foundation was laid for the overall concept. I had hoped for more. A Thousand White Women was yet another mom book club read for the month. The historical fiction was brilliant, and wonderfully written. But, please note, this book is not meant for children. There are several references to intimacy and some language used; which is a shame as the story itself could have stood on its own two feet.

You may have noticed a few changes to our review format. It’s a work in progress, but one we hope will work better for you readers and us. Join us again next month as we explore a world of literature and the adventure of reading. Aren’t books so much fun?!

Your Turn!: Some words sound appealing to the ear. Do you have any favorite words?