“Fortunate are the few who marry for love.” 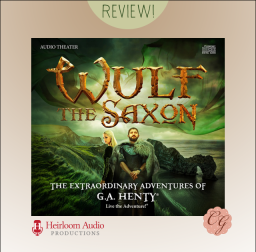 We’re up for another road trip and that can mean only one thing… another audio adventure from Heirloom Audio Productions! This trip we’re enjoying Wulf the Saxon by G.A. Henty, and exploring the history of the Norman Conquest.

Heirloom Audio Productions is “passionate about bringing real history to life”. This is obvious by the great lengths they put into each production. Their vast audio collection includes such titles as Under Drake’s Flag, In Freedom’s Cause, With Lee in Virginia, and more. Our newest story, Wulf the Saxon, centers around the year 1066 and the Norman invasion of England. It is voiced by an outstanding cast including Brian Blessed, Chris Larkin, Helen George, Jack Farthing, Sian Phillips, and Patrick Godfrey.

Wulf, a Thane in England, is page to Harold of Wessex. Through Wulf’s adventures we learn of Harold’s misfortunes with his brother William (the Conqueror), the Welsh wars, Harold’s ascension to the throne, an attempted assassination, and the eventual invasion and conquest by William.

As we prefer listening to audio theatre in one sitting, another day-trip would have given us the perfect opportunity to enjoy this wonderful audio drama. However, on this adventure we had along company which prevented us from finishing our tale. Instead, we enjoyed Wulf the Saxon over the course of several days during shorter drives. This did alter our listening experience slightly – as this required a short, mental review of what we’d heard thus far – but did not detract from our overall experience of the story. My oldest daughter and myself were the primary listeners. We discussed both story and overall impressions as we progressed through Wulf the Saxon.

Wulf the Saxon one would expect the story to contain a great deal of battle scenes and fighting. Listeners will not be disappointed. Truthfully we will more than likely revisit this

audio drama a few more times to fully appreciate all the historical characters who played a part in the Norman Conquest, and to understand the entirety of the battles. As we have not previously studied this piece of history in great detail, we ladies especially found the aspect of Harold’s choice of wife affecting his political standing to be of interest. We felt for him as he battled the decision to choose between the love of his life, Edith, and a bride who would hopefully provide peace for his country; asking ourselves which decision we would make. The story was well told, the voice acting superb, and the audio quality itself outstanding. We enjoyed Wulf the Saxon from an historical standpoint, and highly recommend the audio drama to young men who enjoy action/adventure stories.

As in our reviews of Captain Bayley’s Heir and In the Reign of Terror, families who’ve chosen to be members of the Live the Adventure Club will soon have access to a multitude of bonus resources for Wulf the Saxon, including the read-along. We’re very much looking forward to the Study Guide & Discussion Starter and more!

Once again we were amazed by the quality to be found in this extraordinary adventure by Heirloom Audio productions. Wulf the Saxon was a blessing to enjoy; one we look forward to revisiting time-and-time again.

Your Turn!: Do you have a favorite G.A. Henty Story?

This site uses Akismet to reduce spam. Learn how your comment data is processed.